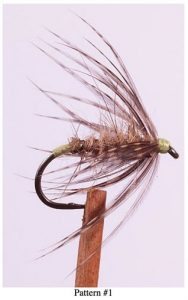 March is the time of the year that we start to see the emergence of caddis fly here on the White river system and many others around the country. This is a time of the year that I always look forward too. The caddis fly brings about a feeding frenzy very unlike the slow deliberate rise forms associated with a emergence of may fly and midge. And in many cases the caddis will be the larger of the invertebrate species that are available to the fish in that particular water system.

Early season fish are hungry as many of the other food sources are not as yet in great abundance and it is not unusual for trophy fish to lose a great deal of caution that they will naturally attain as the season progresses. I have in my time caught many great fish during the caddis hatch. In the early season the majority of caddis will emerge during the hours of daylight. As the warmer weather takes over then the caddis emergence will take place during the dusk to dark period and at times way into the small hours of the morning. If you are out at such times you can really have a ball I can tell you, and again those big Browns just love to feed at such times.

The only main difference between species of caddis is size and color orientation so far as its relationship to a catching fish is concerned. You have a number of ways that you can deal with a rise to a caddis emergence from fishing pupae imitations to the adult winged insect. Some of the techniques that I use allow for all three stages to be fished at the same time.

The fly I am going to introduce to you is generally known as the green tail. This fly has some past historical aspects. It is one of the best soft hackles you will find to fish with during a caddis emergence regardless of the species. Back in the UK this fly is used when the Grannom sedge fly emerges, the female does carry a very distinctive green egg sac, which is why the fly is called the green tail. Regardless of the caddis species that is abundant at the time, you will not go far wrong with this fly. I have introduced some variations to this fly over the years and for that purpose I will give you three green tail patterns to tie. You may of course fish with more than one at a time by techniques from up stream dead drift to slow retrieve pulls and pauses. 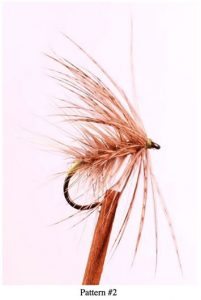 Size of the fly can be determined by the species you have on your water and you can of course alter the overall color tone of the fly by body and hackle combinations.

Tying Thread: You may use brown, tan or green.

Body: Natural hare fur from the mask of a hare or other dubbing to suit your species color.

Hackle: For the lighter shades brown partridge for the darker species English grouse. You may 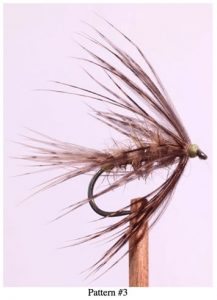 To tie the fly run a thread wrap from midway of the hook shank to the bend. Here build a not too large butt of the green thread. Take the length of gold oval tinsel and tie this in below the hook shank with three thread wraps. Build a neat dubbed body of the hare fur. Then make the 5 spirals of gold rib to the thread and cut off the excess. Take the Partridge hackle and strip all the base waste fiber off. Tie in the hackle by the tip and make 2 or 3 full winds. When done secure the hackle and cut off the excess. Whip finish and varnish.

The second fly pattern differs from the first by having a light ginger hen hackle palmered down the body of the fly before the Partridge hackle is tied in at the head of the fly.

The third fly pattern differs from the first only by the fact that it has a tail either from ginger hen or Partridge hackle. 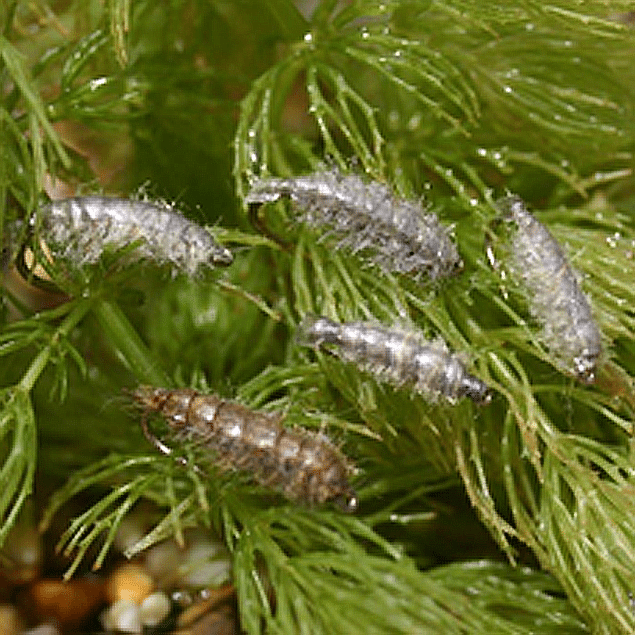 Scuds and Sows
Almost all freshwater systems in the world will contain freshwater shrimp of some kind. Sow bugs may be localized in some cases. Water systems with a good PH are generally the most favored for high concentrations of scuds. Those with a high acidic content, less so. Either way, both are important food sources for many species of fish, not just the salmonids.

For the fly fisherman they form a very important part so far as the artificial is concerned, and also will enable many fish to be caught. Fly fishers generally refer to the fishing of such flies under the generic term of nymph fishing though this, of course, is not true in this case as scuds and sows are not nymphs. There are many fly patterns that exist that represent both scuds and sows but many more so in the case of the scud.

END_OF_DOCUMENT_TOKEN_TO_BE_REPLACED

Your Most Memorable Fish 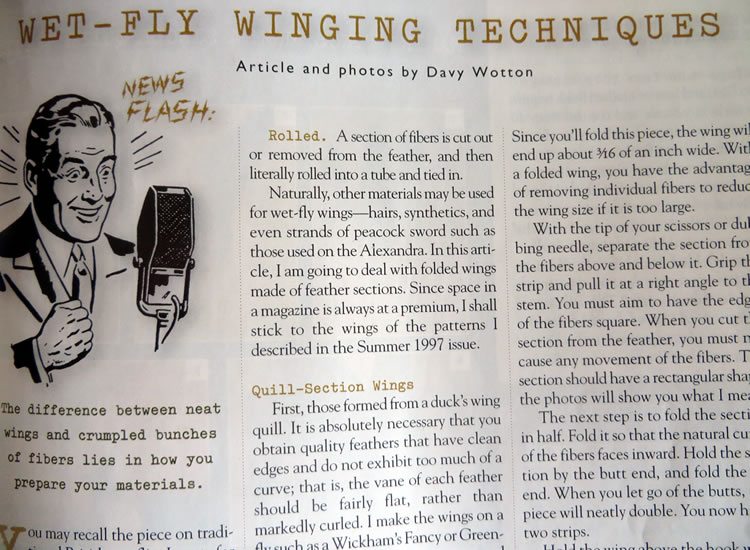 For my self there are two particular fish that l will never forget, and for two very different reasons. Sometimes you may only have one opportunity to get it right, other times you may be in a position to return on many occasions to pit your wits against the adversary. So l would like to tell you my two stories.

END_OF_DOCUMENT_TOKEN_TO_BE_REPLACED

The Illusion of Deception 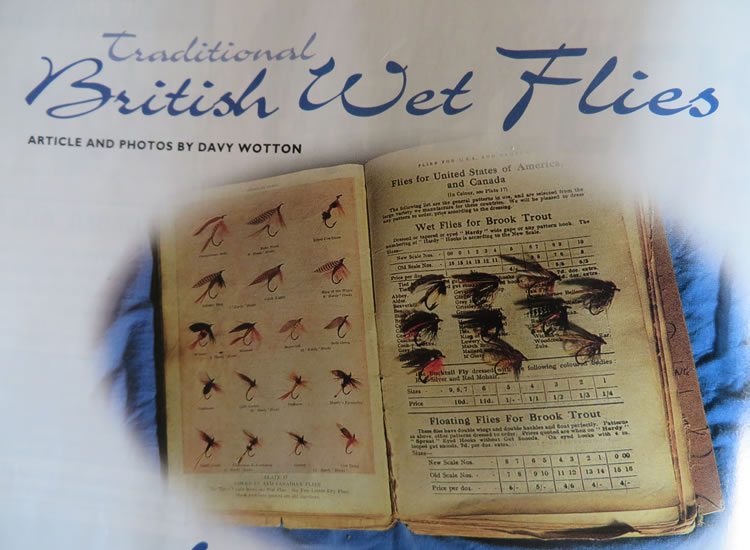 In essence the artificial fly is an illusion that, coupled with the technique of fishing, will hopefully deceive a fish to take it. I, for one, have never been of the mind that three tails, six legs, and various other adornments, not to mention close copy imitations, will result in more effective fish catching fly patterns. In fact l would go so far as to say you will be barking up the wrong tree if you follow that train of thought too closely.

All tied fishing flies, no matter how great of a representation they are of the fly tier's art, or how scruffy they look, will at some time or other catch a fish. The regularity that they do so is the crux of the matter at the end of the day. Even a bare hook can be used to deceive a fish at times! If you form a more generalized view of food forms available to the fish, and those that the fish is more likely to see on a regular daily basis, and couple that with artificial fished in the correct manner, then you will almost certainly catch a great many fish.

END_OF_DOCUMENT_TOKEN_TO_BE_REPLACED 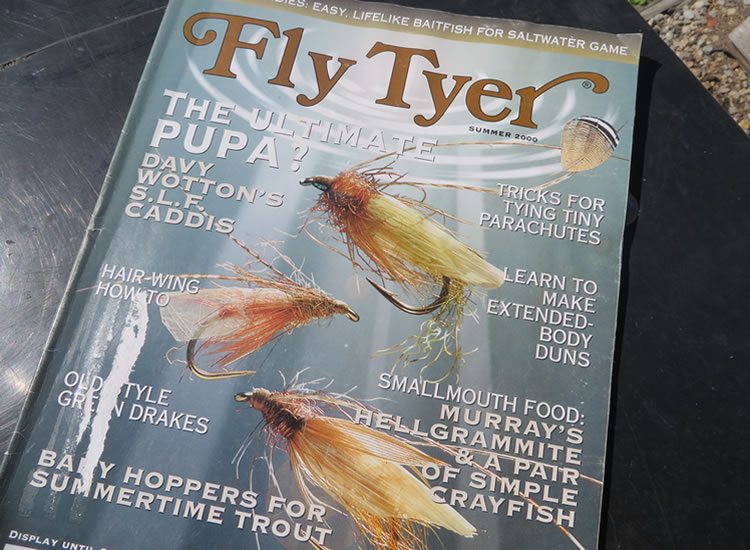 One of the fascinating aspects of fly fishing is having conversations with other fly fishers. It has always fascinated me how very different view points can be offered on a given subject. Let's take a look at one particular aspect; selective feeding behavior.

This feeding activity is more so associated with water systems that have a abundance of mayfly hatches, though this is not always the case. Midge and terrestrial falls can also be very significant at times and there are times that sub-surface feeding patterns will also demand a good level of skill to catch fish. There has probably been more work and research done on this particular aspect than any other, and as yet, there is no 100% answer.